In Torsholt families with the surnames HOBBIE and HOBBIEJANSSEN have their origin. The name HOBBIE is also used by the descendants of several other family lines.
The village Torsholt lies about 5 km south of Westerstede and is today part of the municipality Westerstede.

The Torsholt settlement was first known in 1385 by the squire Reynerum van Tartesholte. In 1425 he, or probably his son, was quoted in court by the dean of the University of Erfurt. One of the two as a citizen of the town of Oldenburg in 1427 bought the Wildbrock estate north of Torsholt, which was sold again in 1439 by the two widows Almod (the old Reyner) and Gebbeke (the young Reyner). In the „Oldenburger Lagerbuch“ from 1428, the tax book of Jacob von Specken for the duke Moritz of Oldenburg, under „Torsholte“ was no HOBBIE mentioned yet, but only „Heyne Beninges hus ghift 1 mk. to 30 gr.“ (later „Meine Benni“) and „Henke 1 mk. to 30 gr.“, who a few years later had to pay „30 gr. and 1 mager swin“ as a tax.

Only in the „Mannzahlregister“ (defence recruitment register) of 1581 Gerdt HOBBING is mentioned as a Hausmann with side rifle, spear, harness, and with a fortified servant with rifle. Johann HOBBY was listed in the Mannzahlregister of 1632, also as villain with a whole inheritance in a „Weinkaufregister“ (recording of all legal contracts), and in 1653 Dierk HOBBI was mentioned. In the early land title records from the middle of the 17th century Dierich HOBBY is mentioned as a Hausmann on the Torsholt farm no. 7 in the historical centre of Torsholt.

Also in this family the first names „Dierk“ and „Dirich“ are very popular, so that the second born son of Dierk Hobby (*1636), Johann Hobby (*1682), calls his first son Dierk HOBBY-JANSSEN (*1717) – in distinction to a son of the farm heir of the same name. This is the foundation of the HOBBIEJANSSEN line in Torsholt, which still exists today. The following picture shows the location of the two farms. 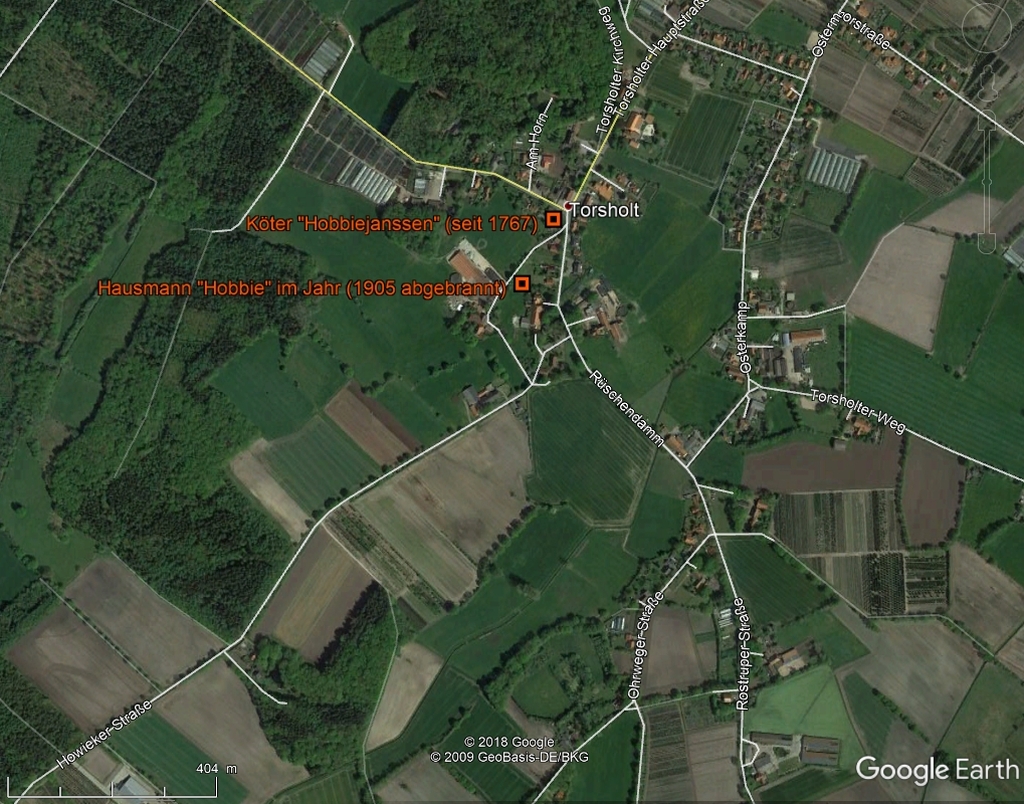 The families „HOBBIE from Torsholt“ until around 1920

The spelling of the names mainly follows the baptismal registers and documents. The German names for farmers and farm hands are retained and are to be interpreted as follows:
„Hausmann“ = farmer with a long-established hereditary farm, first settlers in a village,
„Köter“ = farmer with a smaller, later founded farm,
„Halbköter, Viertelköter“ = Köter with less land,
„Brinksitzer“ = small farmer on the outskirts of the village,
„Anbauer“ = farmer on newly cultivated land,
„Grundheuermann“ = farm hand with own house on non-inherent land,
„Heuermann, Heuerling“ = farm hand without own house,
„Häusling“ = person without own house,
„Dienstknecht, Knecht“ = farm hand.

1. Gerdt HOBBING, *about 1540, +before 1617 Torsholt, Hausmann.
He is mentioned in the „Mannzahlregister“ (defence recruitment register) of 1581 under Torsholt with spit, armour, side rifle and a well-fortified farm hand with long rifle and thus the currently known top ancestor of the families „HOBBIE from Torsholt“. Since the name „Hobbing“ apparently did not appear here before, the „ing-form“ of this early name and the first name „Dierk“ or „Dierich“, which is preferred again and again in the following generations, lead to the assumption, that Gerdt HOBBING was probably a descendant of the „HOBBIE from Apen“ family (8 km west of Torsholt). Thus he was a descendant of Gerke HOBBINGE (around 1400-1437) and a younger brother of Dierich (around 1530-after 1581). However, this will probably not be proven anymore.

The following Oldenburg Vogteikarte shows to scale the Hausmann place „Hobbie“, the Köterei „Hobbiejanssen“ and the settlement of Torsholt at this time.