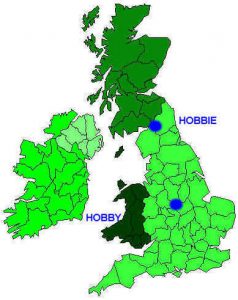 Today about 400 HOBBY families still live in Great Britain and Ireland. After a few dozen families wrote their name as HOBBIE in the past, it seems that the latter spelling is no longer used there today. Further information on the current distribution in Great Britain is not yet known.
The names HOBBIE and HOBBY belong to the oldest Anglo-Saxon names in England, both forms are found for the first time before the Norman conquest in 1066 AD. The name HOBBY is attributed to a family who lived in a village called HOBY in the county of Leicestershire. HOBBIE is first mentioned in the county of Berwickshire on the border with Scotland. A common origin of these names in Great Britain is quite conceivable, although the spelling in different sources and times varies between HOBBY, HOBBIE, HOBBEY, HOBY, HOBI, HOBIE and HOBEY.

The first ancestors of these English families mentioned by name HOBBIE / HOBBY are:

Also known is the ballad about „Hobbie Noble“, the nobleman who, around 1581, at the time of Queen Elisabeth I, made the borderland to Scotland unsafe as „Outlaw“.

In the 17th century, Cromwell’s land seizure also brought with it
some HOBBY to Ireland. Also at this time, soon after the Pilgrim Fathers had emigrated with the „Mayflower“ in 1620, HOBBY families from England (and later also from Ireland) came to New England, below some documented names: