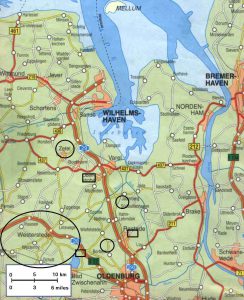 Origin of the families Hobbie/Hobben etc. from the administrative districts Ammerland and the southern Friesland

All persons known in Germany today – and about half of those living in the USA – with the surname HOBBIE, as well as a large part of the name variants, can be traced back to ancestors in the area of the former Duchy of Oldenburg, northwest of Bremen. This does not apply to the American families in the notation HOBBY, who immigrated almost exclusively from England. In the rest of Germany, but also in the rest of mainland Europe (except in the Netherlands), no name could be found before 1800 which contains the part of the name „Hobb“ or could be associated with the HOBBIE ancestors.

The oldest documented mention of a farm that was later inhabited by a HOBBING family is a farm in 1124 in the centre of Linswege in the municipality of Westerstede. The surnames HOBBING and HOBBEN are documented for the first time in 1428 in Jacob von Specken’s „Lagerbuch“ (land propertry and tax register) around Westerstede, and the surnames HOBBEKEN, HOBBY and HOBBEIE are first to be found in the „Mannzahlregister“ (defence recruitment register) from 1581, which Duke Johann VII of Oldenburg had drawn up by his bailiffs. In the land registers and church books beginning in the 17th century then also the name variants HOBBIE, HOBBJE and HOBJE appear, as well as gradually the double names HOBBENSIEFKEN / HOBBIESIEFKEN, HOBBIEGERDES, HOBBIEOLTMANNS, HOBBIEOETKEN, HOBBIEBRUNKEN and HOBBIEJANSSEN in different spelling. All early farm owners were hereditary farmers, i.e. farmers on their own plaice.

All these names initially concentrate on seven locations in the Westerstede-Apen area, which is thus to be regarded as the area of origin of the HOBBIE families of German origin, and, starting somewhat later, on four others in the Wiefelstede-Rastede-Zetel area and in East Frisia’s Ostrhauderfehn region. In the upper picture the ellipses and circles refer to this early mention of the names HOBBING, HOBBEN, HOBBY, HOBBEIE and HOBBIE, the rectangles to the name HOBBEKEN, which later developed into HÖPCKE / HÖPKEN.

The adjacent map shows Potshausen in the area of today’s East Frisian municipality Ostrhauderfehn, where in the 17th century a family branch is mentioned for the first time, whose descendants living today bear the names HOBBY and HOBBING. This branch probably also originates from the Apen-Westerstede area.

The former duchy of Oldenburg is bordered to the north by the North Sea, to theand east by the river Weser and to the west by East Frisia, which was hostile in the Middle Ages. In the south, the Protestant duchy, which had been in existence since 1546, bordered about 20 km south of Oldenburg on the sphere of influence of the Catholic prince-bishopric of Münster. In addition, the Jade Bay, extended by several storm surges, formed a bar north of the Zetel-Varel line, to the east the moors narrowed the mobility of the population further on a line east of Varel-Oldenburg. Thus all known HOBBIE families of this area were limited to a radius of approx. 30 km in diameter until the 17th and 18th century and therefore partly have common ancestors.

Until 1581, subsequent sons of the „HOBBEN from Ocholt“ family had founded families in Apen and Westerloy. A son of the „HOBBIE from Linswege“ had settled in the impoverished Zetel, which only passed from East Frisia to Oldenburg in 1517. The HOBBIE families, first mentioned in Torsholt and Howiek in 1581, had probably migrated from Apen.

In 1613 Eilert HOBBIE was first mentioned in Rastederberg, who probably came from Apen. And in 1634 Johann HOBBIE was named in Wiefelstede-Bokel, who could possibly come from Linswege.

From 1700 onwards an Eylert EYLERS was mentioned in Detern and Potshausen in East Frisia, whose descendants later called themselves HOBBY again because they probably descended from the HOBBIE families from Howiek or Apen. Around this time also descendants of the families „HOBBIE from Hollwege“ spread in the area Moorburg-Burgforde-Espern, also under the name variants HOBBIEBRUNKEN and HOBBJE.