Today, Potshausen is part of the municipality of Ostrhauderfehn in the East Frisian district of Leer. The oldest documented mention of Potshausen (Pophteshusen) can be found on December 8, 1409 in the arbitration award of the council messengers of the cities of Hamburg and Lüneburg in the disputes between Keno tom Brok on the one hand and Hisko von Emden, Enno von Norden and Haro Idzerdes on the other. Potshausen is said to have originally been situated on the northern side of the Leda river in today’s Jümmiger Hammrich. The rise of the water gradually forced the inhabitants to leave their homesteads and to move to higher areas (today’s location of the village). This is how the present Potshausen came into being.
The name „Hobby“ was first recorded in 1811 during the French administration of East Frisia in Potshausen. The distance to the neighbouring Oldenburg villages with families called „Hobby“ is about 14 km to Apen and about 18 km to Ocholt and Howiek.

The long-standing farm „Hobby“ in field 12 is still owned by the family in recent times and today bears the address „Potshauser Str. 42“. The following picture shows the situation in today’s world. 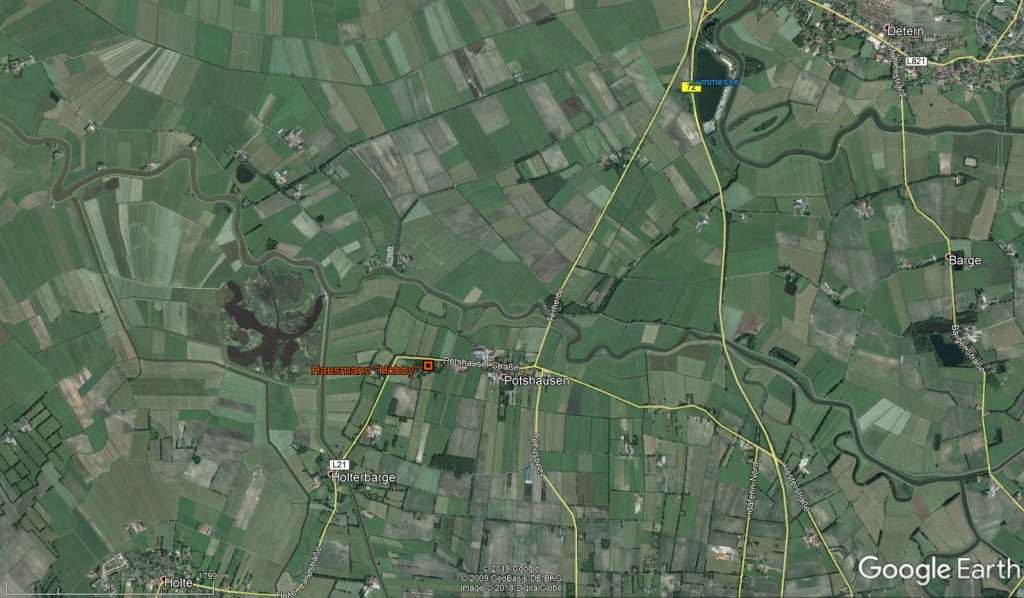 Before from 1811 after an order of the French administration to accept fixed family names, the family name „Hobby“ was accepted, the surname of the ancestors changed between „Eylers“ and „Hinrichs“ according to the patronymic naming in East Frieland. The first mention was the funeral entry of an Eylert EYLERS on 16 December 1693 in Potshausen. In 1645 already an Eylert EYLERS was named in Detern, 4.5 km away. He had probably moved with his wife and both sons from Detern to his wife Fraucke Focken’s father’s farm, since in the Stickhauser official invoice of 1732 a Glas FOCKER and before that Focke GLASSEN are named as previous owners.

According to oral tradition in these families, the ancestors are said to have come from Oldenburg. Thus there is a high probability that the required choice of a fixed family name did not accidentally fall on „Hobby“, but that the still handed down name of the Oldenburg ancestors was „revived“, where fixed family names had already become common since the 15th century. Thus the Potshausener could descend around 1600 from the families HOBBY in only approx. 14 km distant Apen, and/or in 18 km distant Howiek in the east neighbouring. The name Eylert or Eylers, which is also common there, underlines this assumption, but there is probably no longer any proof for it.

The families „HOBBY & HOBBING from Potshausen“ until around 1920

The spelling of the names mainly follows the baptismal registers and documents. The German names for farmers and farm hands are retained and are to be interpreted as follows:
„Hausmann“ = farmer with a long-established hereditary farm, one of the first settlers in a village,
„Landgebräucher“ = land user, farmer.

1. Eylert EYLERS, *around 1650, +16.12.1693 Potshausen, farmer.
According to „Ortssippenbuch“ (fmily genealogy book) for Potshausen he is the earliest documented ancestor of the families „HOBBY & HOBBING from Potshausen“. As mentioned, he was with high probability a descendant of the families „Hobby“ from the Oldenburg Howiek or Apen. He married around 1677 Fraucke Focken (*around 1655) and had two sons with her. Eylert EYLERS (1678-1759) became the farm heir. Focke EYLERS (1680-1703) died young in Potshausen on 24.02.1703.

A) The families „HOBBY from Potshausen“.

A.7. h) Georg Heinrich HOBBY, *02.12.1900 Oldenburg-Osternburg, +July 1983 Munich, judicial officer and chief inspector of military justice.
He married in 1926 Rosa Klara ‚Anna‘ Müller (1904-1992) from Rauenstein, district Sonneberg and had with her three sons and one daughter.

B) The families „HOBBING from Potshausen“

B.5. Remmer Hinderikus HINDRIKS later HOBBING, *28.11.1806 Bunderneuland, +12.08.1865 Norden, schoolteacher, sexton, organ player .
It was he who, as a prospective teacher, arranged for his family to adopt the surname „Hobbing“ by 1826 at the latest. His relatives in Potshausen had adopted the name of their ancestors, „Hobby“, after the decree of the French administration issued in 1811. After this determination fell asleep again in East Frisia after the end of French rule in 1814, Knig Georg IV. from Hanover made this Napoleonic law for a fixed ancestral name in 1826 also the Hanoverian law. In this context the educated Remmer might have decided for the earliest form of the name „Hobbing“ documented in Oldenburg.
He was first a teacher’s assistant, then a teacher in Dünebroek, in 1826 in Critzum and since 1830 in Greetsiel, where he was also a sexton and organist. He died on his way to the spa on Norderney. He married Geelkelina Hinrika Meyer (1816-1869) from Greetsiel in 1836 and had 11 children with her, 8 of whom reached adulthood. For Hinricus Hinrich Knottnerus HOBBING (1837-1883) see B.6.a). Johanna Catharina HOBBING (1839-1924) married the teacher Freerk Hinderks Ross (*1847) from Canum in Greetsiel in 1872 and had three sons with him. Martin Heinrich HOBBING (1842-1908) was a teacher, conductor, music director and piano teacher and died single in Bremen. For Johann Heinrich HOBBING (1847-1929) see B.6.b). Wüpkea Gertruda HOBBING (1849-1925) married in 1895 in Varel the technician and engineer Johann Hinderikus Diederichs (*1830) from Greetsiel. For Peter Eilart Cornelius HOBBING (1851-1931) see B.6.c). For Eilert ‚Heinrich‘ HOBBING (1854-1917) see B.6.d). Antje Cornelia HOBBING (1856-1885) died young and single. On Ubbo Gerhard HOBBING (1859-1932) see B.6.e).

Further information, also on children not listed here, deceased and unmarried, as well as on other descendants after 1900, if known and (e.g. in the case of living persons) not protected, may be provided on request, see Contact.