The municipality of Zetel lies about 15 km southwest of the town of Wilhelmshaven and belongs to the district of Friesland. It is situated 17 km south of the district town of Jever and just as far north of Westerstede, the centre of the district of Ammerland, where all other families of German origin with the names „Hobbie“ and „Hobben“ have their origin. Zetel lies on the northern edge of the Geestflächen and was thus not exposed to the earlier storm tides like the more northern marshes. Grave finds in Zetel suggest that this area lying on a Geestrücken was already inhabited in the Neolithic Age (around 2500 BC). Hook ploughs and other evidence of the settlement. The earliest rural settlements were probably created by the Germanic chauks living between the rivers Weser and Ems at the turn of time. In this area it was around 780 AD the English monk Willehad, who tried to win the inhabitants for Christianity. After the foundation of the first church in Leer around 800 A.D., Bishop Unwan had more and more churches built in today’s East Frisia and northern Oldenburg, initially mainly in timber construction, especially from around 1000 A.D. onwards.

In the course of this development, the first church in Zetel was built around 1100 A.D. on a mound at the southern edge of a 6 m high sand ridge, the Zeteler Esch. On the site of the first wooden church a stately church made of granite blocks is finished in 1250 and consecrated as St. Martin’s Church, as it still stands today after destruction around 1400 and subsequent reconstruction. The name Zetel is first mentioned as „Sethle“ (for „settlement“) in a document of Pope Martin V from 1423: „The villages of Dangast, Ellens, Bockhorn, Zetel and Horsten are abandoned due to the passage of time, the fields have not been cultivated for a long time and spoiled by salt water. The churches are empty, robbed of their bells, altars, missals and reliquaries“. This makes it understandable that there are no references to farms, families or persons from this period. The church records with exact personal details do not begin in Zetel until 1706. Before that, from around 1580, there were isolated registers for tax, land allocation and defence recruitment. The „Oldenburger Salbuch“, the tax book compiled by Jacob Scheinheise (after marriage called Specken), the Minister of Duke Moritz von Oldenburg in the period 1428-1450, unfortunately does not yet contain any information for Zetel, since the „Friesische Wehde“ with Zetel, Bockhorn and Neuenburg, which had long been fought over by East Frisian chieftains and Oldenburg counts, did not finally belong to Oldenburg until the „Peace of Zetel“ on 3 December 1517.

The following picture shows the location of Zetel and the current spread of the families „Hobbie aus Zetel“. 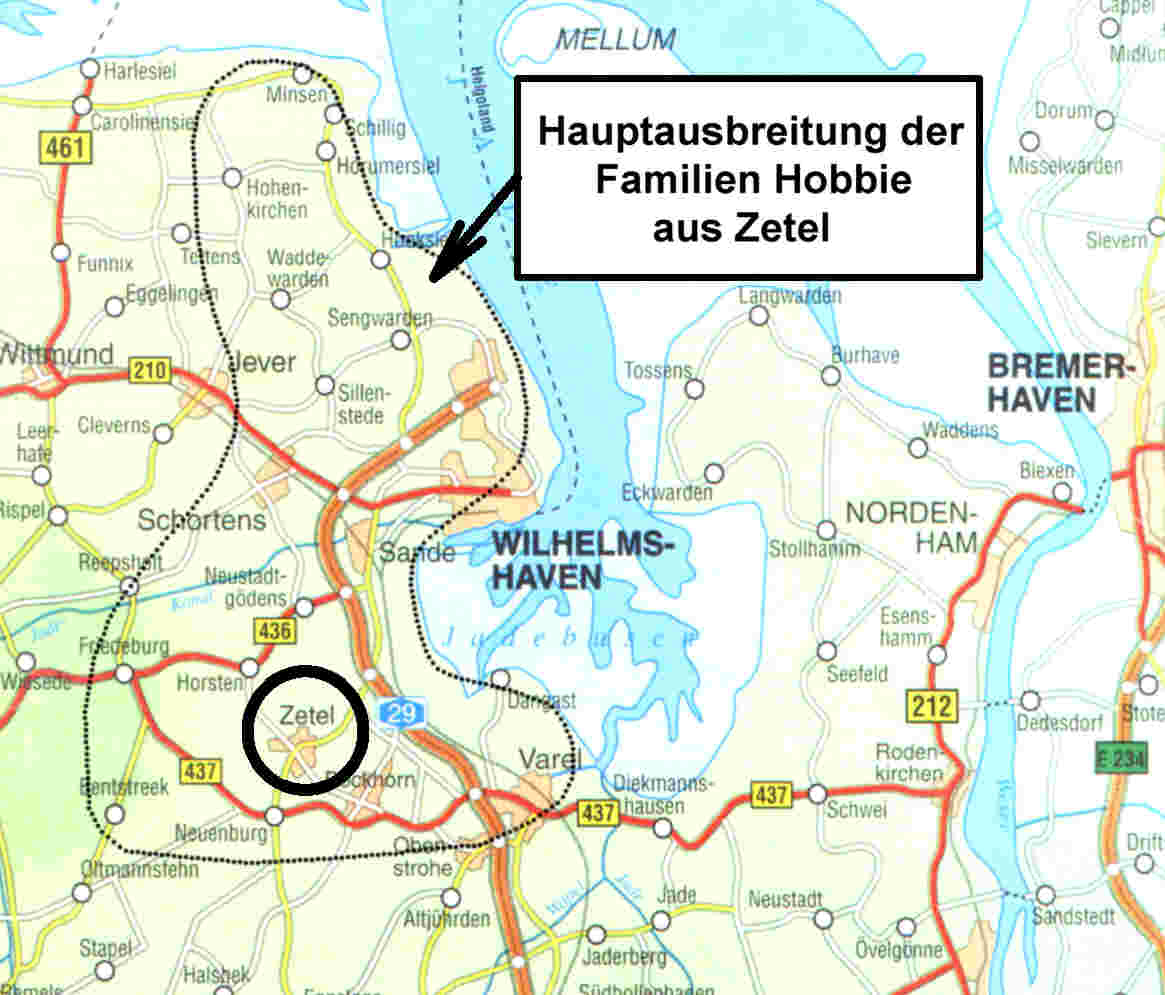 The parent house of the HOBBIE families from Zetel stood from the 16th century until the middle of the 1950s at the present address „Westerende 2 – 4“, where then the secondary school was built. 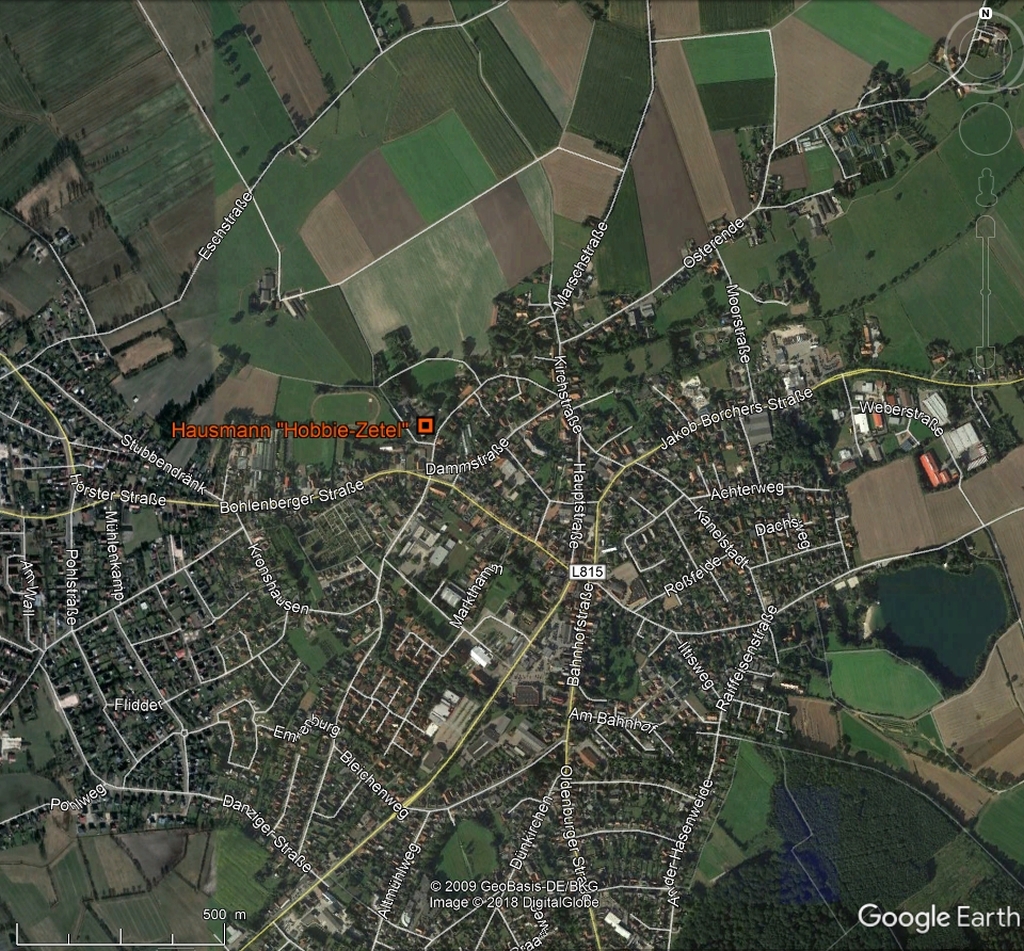 The map below shows the village of Zetel around 1790 geometrically correct at a scale of 1 : 20,000. The parent house of the families „HOBBIE from Zetel“ is marked with a grey circle. A few houses further northeast the cross symbols of the churchyard with the church are weakly recognizable, north of it are the fields of the Zeteler Esch, which separate the local situation from the Zetelermarch (marshland). The semicircular square on the south-eastern edge of the village later became the market square and today represents the centre of the village. The mill on the left-hand side of the map is already located in the settlement of Bohlenberge.

As early as 1928, the family tree of the „HOBBIE from Zetel“ families was published under the title „Stammfolge der Familie Hobbie (Börding) aus Zetel in Oldenburg“ in volume 59 of the Deutsches Geschlechterbuch (DGB), the so-called „Ostfriesenband“ (East Frisian volume), which was also the only comprehensive description in the Geschlechterbuch of all HOBBIE families and their relatives. This presentation was also published as a special edition at that time (see title page). In this special print also a coat of arms „Hobbie“ is illustrated, which was accepted only 1922 by the families „HOBBIE from Zetel“ and then – in black-and-white, but with naming of the colours – also in the „Bürgerliches Wappenbuch“ (The civil coat of arms book) of Siebmacher was entered in volume V, section 12 on plate 65.

This coat of arms is described as: „in silver a red, golden inseminated rose with green sepals; on the red-silver bulged helmets with the same cover between two bull horns divided by red and silver over a corner a golden pointed cross“ (see illustration).

The ancestor Renke Hobbie, born around 1560, who is named in the German Gender Book, is identical to the „Hausmann“ (heredity farmer) Reincke Hobbeie, who was first named in the „Mannzahlregister“ (defence recruitment register) of 1581 under no. 189. There is still another Reincke Hobbeie named as „Köter“ (farmer with a smaller estate) under no. 230, who cannot have been a brother, but must have been his uncle. While the Hausmann Reincke Hobbeie is listed with 2 persons („2P“), armour („Ha“), spear („Sp“) and rifle („Ro“), his presumed uncle only starts with one rifle.

Only a few years ago it became known that Johan Hobbie as ae Zeteler Meier (inherity farmer) was named in the land allotment from the embankments of 1582 and 1596. He will therefore have been the elderly father of Hausmann Reincke Hobbeie, who was listed 1581 in the Mannzahlregister.

The earliest mention of members of the HOBBIE family in Zetel with exact dates of their life can be found on gravestones, which can still be seen today on the Zetel church yard.

Thus Gerdt HOBBIE (1641-1696) and his family are the oldest Zetelers of this name, who – still before the church books begun here only 1706 – are clearly dated and assigned. The earliest appearance of the name „Hobbie“ in Zetel was probably after the „Peace of Zetel“ at the end of 1517. Since the name already existed before in Ammerland, but not in East Friesland, where the name „Habben“ originated separately patronymically, a new settlement of Zetel is to be assumed after the decline reported in 1423 by moving in from Ammerland. Also further Zeteler surnames with origin in the Ammerland let this appear probably.

The first names „Johan“, „Renke“ and „Gerd“, being popular within the „HOBBIE from Zetel“ family, were are also frequent among the „HOBBIE aus Linswege“. Therefore a later Linswege son will very probably have come to Zetel, only 16 km away, and taken over an empty or impoverished estate

. According to a papal document from 1423, Zetel had been almost abandoned after storm surges, failed harvests and diseases and five years later had been ceded from Rüstringen to Oldenburg, but only with the „Zetel Peace“ of 1517 the hostilities between East Frisia and Oldenburg in this area were finally ended. Even though such a son (presumably a Reincke HOBBING *around 1500) is not documented in Linswege, he fits into the family there. He is therefore assumed here to be the progenitor of the „HOBBIE from Zetel“ families, even if this could not be confirmed by a DNA test carried out in 2007 with several living male descendants of both lines.

The families „HOBBIE from Zetel“ until around 1920

The spelling of the names mainly follows the baptismal registers and documents. Also in the Zeteler church books in the period from about 1722 to 1766 by the pastors the Low German spelling „Hobje“ is preferred repeatedly.
The German names for farmers and farm hands are retained and are to be interpreted as follows:
„Hausmann, Meyer“ = farmer with a long-established hereditary farm, first settlers in a village,
„Köter“ = farmer with a smaller, later founded farm,
„Halbköter, Viertelköter“ = Köter with less land,
„Brinksitzer“ = small farmer on the outskirts of the village,
„Anbauer“ = farmer on newly cultivated land,
„Grundheuermann“ = farm hand with own house on non-inherent land,
„Heuermann, Heuerling“ = farm hand without own house,
„Häusling“ = person without own house,
„Dienstknecht, Knecht“ = farm hand.

1. Reincke HOBBING, *around 1500 Linswege, +around 1560 Zetel, Hausmann.
This ancestor of the family „HOBBIE from ZETEL“ is not documented yet. His existence results from the two presumed sons Johan and Reincke, who are named in the land allocations 1583 and 1604 from the embankments 1582 and 1596 respectively (named in issue 26 of the „Gelbe Serie“ of the Oldenburgische Gesellschaft für Familienforschung, OGF). Probably Reincke HOBBING (around 1500-around 1560) as the later son of the Hausmann Reyneke HOBBING (*around 1460) in Linswege came from there to Zetel about 1525 to 1530, i.e. after the „Zetel Peace“ of 1517, to take over an empty or impoverished farm. Thus the family line „HOBBIE from Zetel“ is probably a side line of the families „HOBBIE from Linswege“ and this Reincke HOBBING (around 1500-around 1560) is thus a great-grandson of their earliest Hausmann Teyleke HOBBING (*around 1400) mentioned in the Salbuch of 1428.
He probably had at least three sons. Johan HOBBIE (around 1530-around 1605) was the heir to the estate, see 2.a). For Reincke HOBBEIE (around 1540-um 1590) see 2.b). Gerd HOBBIE (around 1550-around 1580) became the founder of the ancestral line „HOBBIEGERDES“ of the families „HOBBIE from Zetel“, see further under „Hobbiegerdes„.

2. b) Reincke HOBBEIE, *about 1540 Zetel, +about 1590, Köter.
He is mentioned in the Mannzahlregister of 1581 (no. 230) as „1 person with rifle“, also as Köter in the land allocation 1583 from the dike building of 1582. He was most likely the brother of the forementioned Hausmann Johan HOBBIE and the uncle of Reincke HOBBEIE (*around 1560). He probably had at least two sons. Otke Hobbie (around 1570-around 1640) was the heir of the Köterei and became founder of the ancestral line „HOBBIEÖTJEN“ of the families „HOBBIE from Zetel“, see further at „Hobbieoetjen„. For Henrich HOBBYE (around 1575-around 1660) see 3.b).

3. a) Reincke HOBBEIE, *about 1560 Zetel, +about 1620, Hausmann, Meyer.
He is called in the Mannzahlregister of Neuenburg 1581 for Zetel („Setell“) as Hausmann under no. 189 „Reincke Hobbeie, 2 persons with harness, speer and rifle“. The other „Reincke Hobbeie“ of the same name was probably his uncle, brother of his first-born father Johan Hobbie. In the aforementioned reprint of the Hobbie-Zetel family tree „Renke Hobbie, born around 1560“ was described as the oldest known ancestor of the families „Hobbie aus Zetel“, which is out of date as explained above. He had at least two sons: Rencke HOBBIE (around 1600-around 1670) was the heir of the farm, see 4). Johan HOBBIE (c. 1610- c. 1640) is listed in the Mannzahlregister 1630 and 1635 at the 1st Corporalschaft, further information about him is not known.

6. Gerd HOBBIE also HOBJE, *15.07.1696 Zetel, +20.08.1757 ibid., Hausmann, Kirchjurat.
When he married Gesche Hüllstede (1690-1757) from Steinhausen in 1716, he called himself „Gerd VON BUSCH“ and took over the orphaned Hausmann position of his grandfather and uncle. They had four sons, all of whom reached adulthood and married, and three of whom were the starting persons for the three living Family lines today. Gerd HOBBIE also HOBJE (1717-1791) continued this family house as court heir and founded the so-called „eldest family line“, see further under „A) Eldest Zetel family line„. Jürgen Bernhard HOBBIE also HOBJE (1719-1756) married in 1750 in Zetel Trine Bohms (1719-1770) from Osterende and had with her a son Wilke HOBJE (1752-1780) who died young. Johann HOBJE later HOBBIE (1722-1764) was the ancestor of the „middle family line“, see further at „B) Middle Zetel family line„. Renke HOBJE or VON BUSCH and later HOBBIE (1725-1802) founded the „youngest family line“, see further at „C) Youngest Zetel family line„.

The following map from 1790 shows the location of the living quarters of the Middle line and Youngest line in relation to the parent house.